Nannochloropsis
At the base of the marine food chain are single cell organisms, better known as phytoplankton. These tiny plants produce almost all of the biomolecules needed for the growth of zooplankton, but also for the larger “filter feeders”, like molluscs (flame scallops, clams, oysters etc.), sponges and coral. One of the best known algae in the aquaculture is nannochloropsis. These algae produce all the essential amino acids needed for the development of filter feeders and fish. These algae also produce the well known and very important omega 3 acids EPA and DHA. Although Nannochloropsis is mostly known for it’s production of EPA, we have selected a “strain” and cultivation method that ensures that they will also produce DHA. EPA and DHA are omega 3 acids, als known as poly unsaturated fatty acids (PUFA), which fish are unable to make themselves and thus are dependant on their food to contain them. These fats play an important role in the development of pigments (colors), but maybe even more important, they are essential for a good development of the nervous system of fish, and also human. This is also the reason why it is advised to eat fatty fish like salmon. 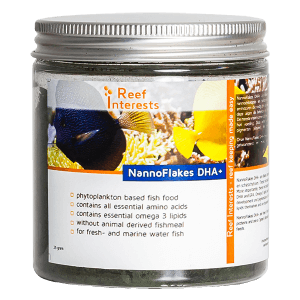 These algae produce all the essential amino acids needed for the development of filter feeders and fish..

NannoFlakes are made by drying Nannochloropsis concentrate and pressing them into flakes. The NannoFlakes are ideally suited for both freshwater and saltwater fish. The nutritional value of NannoFlakes is better than, for example, spirulina flakes (which is not an algae but a cyanobacterium) with respect to omega 3 fats, and amino acid composition. NannoFlakes are entirely of plant origin while most fish feeds are of animal origin, such as fish meal, shrimp meal, etc … In the current climate it is increasingly important to develop “green” products and one of our goals is to reduce fishing especially if this fish is used only for the production of fish feed. Our NannoFlakes also offer a fully balanced and environmentally friendly alternative to existing fish feed.