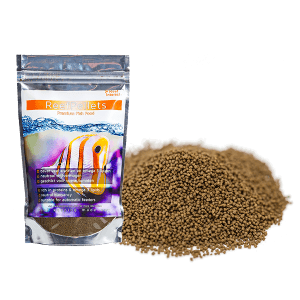 ReefPellets are feeding pellets with neutral buoyancy for corals, fish and shrimp. ReefPellets are formulated with HUFAs, hydrolyzed marine proteins, phospholipids and algae. In contrast to inorganic phosphates, phospholipids are bound to the pellets and thus have a long pellet-retention time, ensuring that the phosphates end up where they belong, inside your fish or invertebrate.

What is special about the Reef Pellets?
ReefPellets are more nutritious then most of the available feeds on the market today. We have added key ingredients that make our product more suitable for every day use in the aquarium. Your fish and coral will be fed with all the necessary Amino acids and fats they need.

This product can be combined with our NannoFlakes and/or NannoPellets to ensure healthy and strong livestock which will result in vibrant colors!