This is the first product that has managed to combine these elements successfully in one bottle. This makes it much easier for you to stimulate coral growth by simply adding some SIM Trace+ to your water. Because Strontium Iodide and Manganese disappear quickly, for best results SIM Trace needs to be added daily in small amounts. Within hours, the trace elements will be gone, but your corals will have had enough time to get them out of the water.

Dosage: Add 1 ml per 100 liters (3.3 oz per 26.5 gallon) of aquarium water daily.
Shake the bottle before use to dissolve any precipitation at the bottom. 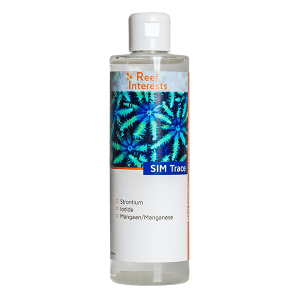